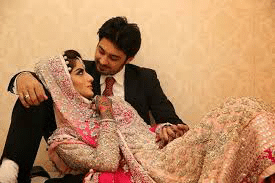 The Pakistani model Sana Khan and Babar Khan was married last year December . But they both don’t fought with their fortune and unluckily indeed Sana Khan was died on last Friday 7th march . They both really loved to each other and very attractive couple of drama industry of Pakistan . We have a video of both these actors in which they had done photo-shot in their Reception (Valimah) party . This occasion has highly cove-raged by media and attended this party by many drama stars of Pakistani industry .

You can watch the video of Sana Khan and Babar Khan of reception party . Its too fascinating and so heart touching for young coupes and lovers .

Recently , this fabulous couple worked together in many dramas especially Rukhsar which is a production of Geo television network . This is not only show in which they worked as a couple . They came several times in different shows .

“Parchaiyaan” Was a Superhit Drama of Sana Khan :-

Sana Khan was a rising star of drama industry . She raised in drama industry after her successful and high rated drama “Parchaiyaan” . This show took her on peek . Well , if we talk about Babar Khan he is also a well known director and he made not only most demanded dramas but he is still on picture .